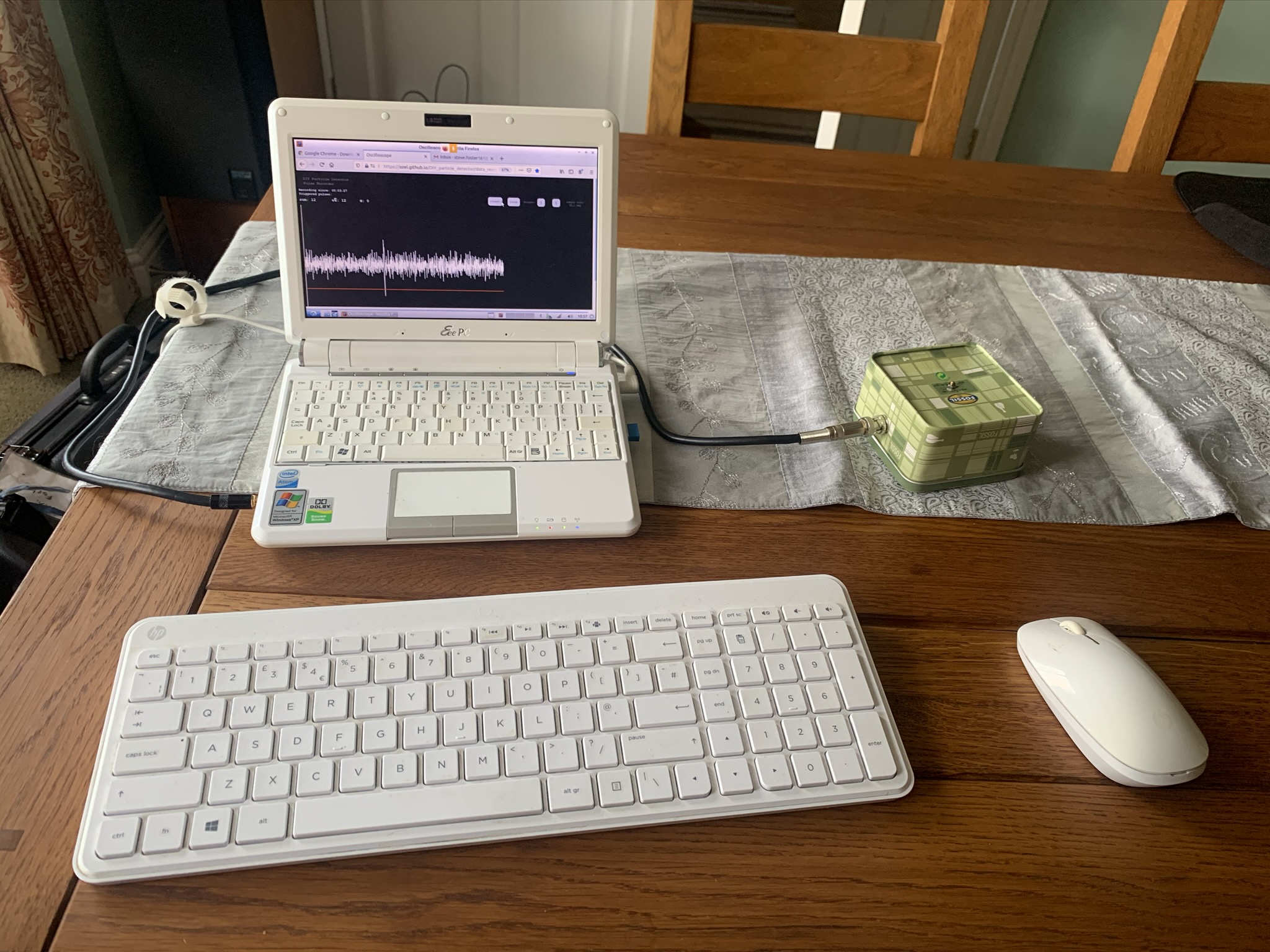 What do you do when you’re stuck at home with a 16-year-old son during a pandemic lockdown? Well, the first answer is that you build a gaming PC. That was a good project with a lot of incentives to complete, but that also meant it was soon over. So, what next? I spotted a post about an outreach project from CERN to build your own particle detector for under £30. Sounded like fun, so here’s how we got on.

Firstly, a bit about ourselves: I’ve just retired from an IT architecture role at a major UK bank, a brave decision when you still have a child at secondary school and there’s a global pandemic looming. My son, Sam, has just completed his GCSEs and is about to enter the sixth form. I have a degree in Physics and Sam has a keen interest in scientific things. We both suffer from hypermobility of the finger joints, meaning that we have limited fine motor skills (translation: we are both klutzes. Even klutzes can successfully build this detector.) I haven’t picked up a soldering iron in anger for a long time and Sam has only done two or three connections for a school project so we are effectively total noobs to this sort of project.

Anyway, here is a write-up of our experience and lessons learned rfom building the electron detector. If you’re planning on building one yourself then you may find this useful

The great thing about the CERN kit is that you can order most of the parts easily using kitspace. Can you really build it for under €30 (about £27) as claimed? Well, yes and no. The exchange rates have all moved, which doesn’t help. The individual components certainly cost less than €30 but you cannot just buy individual components. You have to buy 10 resistors at a time but they are dirt cheap and you’ll just end up spending 30p instead of 3p for the parts you need. The biggest surprise was that you have to buy a minimum of three circuit boards, but this turned out to be a blessing in disguise. It’s handy to have a spare board if your soldering skills are questionable, plus the alpha detector variant uses the same board so you have an incentive to build that model too. All-in-all, the cost of all the electronic components same to just under £40. If you were buying for a class project – a dozen or so boards – I think the bulk price would be closer to £33/€37 per board.

There are some optional costs too that you may want to take into account. We bought a BNC to audio jack cable for about £8 on Amazon as this was quicker, easier and ultimately cheaper than building one from scratch. We also had to buy some tools that we needed but didn’t have in our existing toolbox. You may prefer to buy a metal case or project box for around £6, however I would recommend using an old sweet tin or similar. We used a presentation case off a Fossil watch that my wife received one Christmas. To mount the board in the case, you’ll need some sort of metal standoff. We bought a box of M3 brass standoffs of assorted lengths with all the necessary screws and bolts for about £11 on Amazon. (120 components when you need only one!) You’ll also need some small lengths of connecting wire – about 30cm in total. (Tip: Amazon Prime is well worth the cost if you need to order all these things as you go along.)

Finally, you are going to need some sort of radioactive source to try out the detector. We bought 100g of analytical quality potassium chloride (KCl) on Amazon for under £5. This is a better price than that of the potassium-rich salt substitutes that are also on Amazon and has a higher proportion of potassium to boot.

Before you start, make sure that you have all the tools that you’re going to need, Here’s a list of what we found necessary:

We spent about three elapsed hours over about 3 weeks building the board and maybe another hour building the case and mounting the board into it. Why so long? Well, this project didn’t have the same appeal to a 16 year old as does building a gaming PC. Plus, use of said gaming PC frequently took priority over this project. We decided to solder the components in groups, doing the resistors first, then the capacitors then the semiconductors. The build instructions in the wiki are pretty good and easy to follow.

We tested every joint as we soldered it, making sure to test from another point on the circuit board so as to prove the connection was good. My son did all the soldering on one of the PCBs. I started work on a second board partly as a backup and partly to have something that could form the basis of the alpha detector. (I discovered the hard way that the two variants begin to differ at the third component, R3!)

Here are some shots of the board at different stages of construction:

The first thing to do when testing the detector was to make sure that there were no shorts by measuring resistance across the power connectors. (Tick! A satisfactory 9.8 kilo-ohms) and make sure that power was reaching the board. Then we plugged it into a PC and switched it on. We were using the pulse detector JavaScript to check that it was working. I flicked the switch and…nothing. So, we examined the board. We knew we were novice constructors and some of the joints looked potentially to be dry and on one or two others we could not be 100% sure that we had an air gap between adjacent joints so we de-soldered and remade about 3 joints. Again we connected to the PC and we saw the satisfying pulses when the device was turned on and off. We also saw quite a bit of microphony being picked up when the tin was moved or when one of us spoke near it.

Ok, so next step was to try it with a radiation source. I weighed out roughly 10g of KCl into a plastic lid and positioned it under the diodes in the detector. We hadn’t made a radiation window in the lid of the tin and the diodes were about 1.5cm above the surface of the KCl. I switched on the detector and…nothing, not even the on/off pulses. The detector seemed dead. I took the device apart and retested very connection with the multi-meter and made sure all the case connections were good and that the case was properly wired to earth. I checked that power from the battery was reaching all the necessary parts and that the battery power was good. I could find nothing wrong.

It quickly became apparent that there was an intermittent problem. Sometimes, the JavaScript detector would see a pulse when the device was switched on or off and sometimes – usually – there was nothing. Sometimes you would see noise on the web oscilloscope and sometimes not. I was scratching my head as to what the problem was. Eventually, it occurred to me to try actually listening to the audio output, a trivial thing to do under Windows. BINGO! I could hear white noise when the device was switched on and, just audible over the noise, a soft click every 20-30 seconds. Clearly the detector was working and therefore what I was facing was a software problem.

The importance of sound cards, and repurposing yet again an ancient laptop

I have to say that Oliver Keller was an enormous help while I was trying to get the detector working and I cannot stress enough how important it is to listen to his advice about audio connections and sound cards. The problem seems to be that sound cards (or chips) in modern PCs are too clever for their own good. They are designed to optimise microphone input for Skype and Zoom and that means removing the noise and extraneous clicks that are exactly the signal that the detector puts out.

Modern technology was assuming the detector signal was unwanted noise so I needed some primitive technology. I have an old notebook laptop, an Asus EeePC 901. I bought this about 10 years ago and it has been the subject of several hobbyist projects over the years. I upgraded it’s memory to 2GB. I replaced it’s laughably small 4GB SSD with a 32GB one. I upgraded it from Windows XP Home, via several versions of Ubuntu, to Windows 10 Home. You may be surprised that such a machine can run Windows 10 and MS Office but it can do so, just not well. I backed it up (virtualized it for VMWare) and installed a fresh copy of Lubuntu. I fired up the web oscilloscope under FireFox and now I have a working detector:

You can quite clearly see a detector pulse in the screenshot. The noise sometimes peaks and can give a false reading but these are fairly easy to spot. The false pulses are one sided and lack the rebound peak of a true pulse. From around 25g of KCl, I’m seeing two or three pulses per minute in the detector

So what comes next?

OK, now that the detector is working, what comes next? Our first plan is to try out the python script to make sure that we can see and correctly analyze the energy spectrum from the KCl. Step three will be to try various things to reduce the electrical noise. I have a suspicion that the tin leaks a little light into its interior but that can be remedied with black tape. Step three will be trying out various samples from my small mineral collection in the detector; there’s bound to be something mildly radioactive in there. Step four will be a bit of fun. You may have heard the old adage that even bananas are radioactive? well, we plan to prove it by measuring the beta decay rate from a lump of delicious, potassium-rich banana! I’ll keep you posted on how we get on.